Startup School 2018 started like a roller-coaster for everyone. I checked my email in bed before sleeping (oh why) and read the rejection letter. Ah well. I didn't have too much resting on it but it still stung so I had to get up and go do something to shake it off.

I woke the next day to read the "whoops!" acceptance letter. It was a funny feeling, not exactly happiness because I had already moved on, so it was like an old crush turning up at your door. I can't imagine what all those who had their acceptance withdrawn were feeling or the poor YC staffer living through such a monstrous balls-up. There didn't seem to be any winners here. 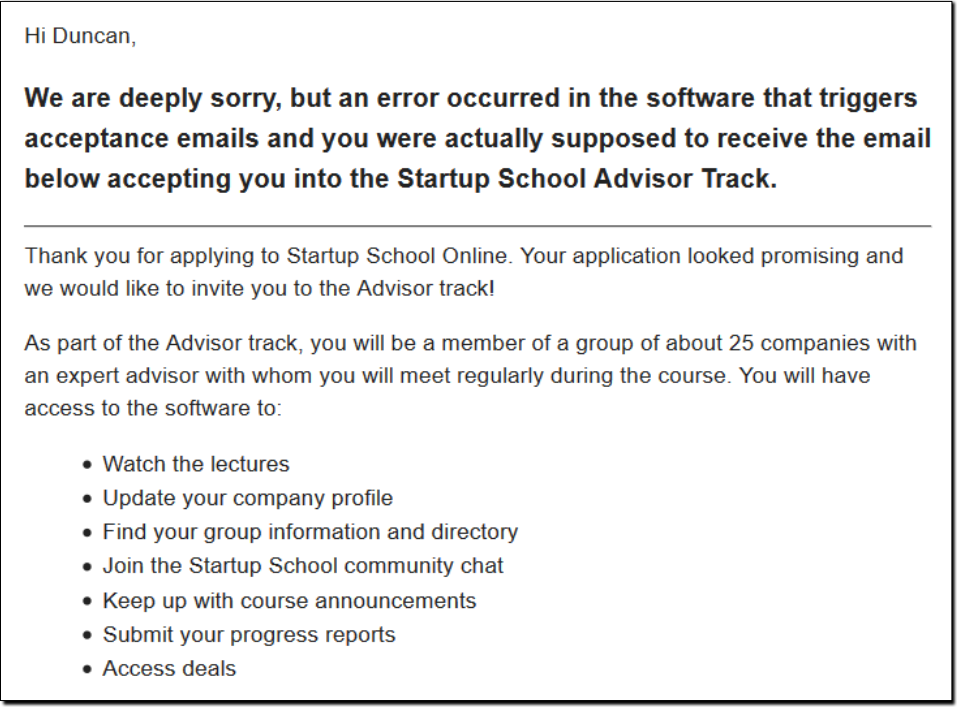 Thankfully, YC found a way, and opened up the program to all 15000 applicants. Its interesting to remove the filter because YC trades heavily on exclusivity. Hopefully 10k more teams creates more opportunities for everyone but who knows how they are going to handle the office hours - I'm not sure advisors scale!

The week kicks off with three lectures:

How to Succeed with a Startup

Sam is looking healthy - he normally looks in need of a few burritos but I think he's been hitting the gym! Its pretty difficult to make general startup advice compelling. I prefer more detailed technical material where there is something to learn. The most interesting comment was a reference to Paul Buchheit's analysis of founders suggesting success rests on frugality, focus and obsession. Hopefully Paul has a session in this lecture series because he always delivers gold.

This is more like it but as a UK firm, the detail is US focussed so mostly passes me by.

A Conversation with Paul Graham

How we all miss Paul Graham posting on HN and writing regular essays. The chat about Robert Morris is a bit surreal. I heard about him long before Paul Graham and YC, only connecting the two much later. It was a bit like finding out Dennis Ritchie was a cofounder of Facebook or something.

The most meaningful part for me:

What you will get wrong is that you will not pay enough attention to users. You will make up some idea in your own head that you will call your vision, and then you will spend a lot of time thinking about your vision in a café, by yourself, and write, build some elaborate thing without going and talking to users, because that's doing sales, which is a pain in the ass, and they might say no, and you'd be way better off finding someone, anyone, who has a problem that they will pay you to fix and fixing it, and then seeing if you can find more people like that. Best case is if you yourself have the problem, right? But you will not ship fast enough, because you don't wanna face the ... You're embarrassed to ship something unfinished, and you don't wanna face the likely feedback that you will get from shipping.

Home-truths but I also wonder if it might be one of those necessary mistakes. In this case, its like landing in a new city. You can pick up a map and walk the main strip or you can just wander and get lost. Following the map, you see what everyone else does but if you yolo'd your way around, you will have an adventure and maybe discover something new. You can still pick up a map or ask a local when you need but you have built a unique understanding of the city free from other's preconceptions. Sure, if you stay lost, you might die in a gutter or if you are too timid then it will be fruitless but if you are on a mission, maybe that early adventure has value.

I think there is some type of law that for all startup advice, there is equal and opposite advice. This may tie into the later discussion of how startups are so counter-intuitive. The typical counter advice is to "stay foolish" with the case-study as mentioned in Sam's talk, that Woz and Jobs needed to ignorance to launch. This can't help but remind me of the classic Apprentice interview:

Q: "Why should you be Sir Alan's next apprentice?"

A: "I can bring ignorance to the table"

Sir. Alan was not hiring for ignorance that season.

The biggest discussion on the forums was about one-line marketing hitting nearly 900 replies.

As Adora mentioned, it is quite a tough thing to say what we are working on in one line. So why not help each other by posting our one-liner and try to understand what the company is about?

We posted our terrible one-liners, oblivious to how we failed to communicate what the business does or why it matters. Somehow we could start a shoe shop and not mention shoes. Its a funny cognitive blind-spot. It's so much easier to fix other people's one-liners than our own. Its like proof-reading an essay. We re-read it 1000 times, believe its perfect, yet all new readers instantly spot that it leads out with "The the...".

It seems to be a perception issue. When we are steeped in a problem, settled issues fade from view allowing us to focus on higher level issues. But we don't share perceptual frames so find a disconnect when when we communicate.

When we're inside the bottle we can't see the label

Its funny that we have so many idioms for being "too close to a problem" but no tools for overcoming it. There is an idea on the Thorny drawing board for capturing perspectives. It will allow you to integrate conflicting reasoning from multiple people. It could be used to model the mind of someone you need to convince or enable colleagues to collaborate while maintaining vibrantly different rationale.

There doesn't seem to be any substitute for seeking someone sufficiently far removed from what you are doing for feedback. Nothing quite like the look of blank-faced confusion as a reality check. Talking of which...

My advisors are Marta and Misha who are building VanGo - a suite of services that makes families’ lives easier. They seem super nice and friendly. They went as far as sharing phone-numbers which, though possibly insane, is a lovely gesture.

For the video conferencing, we are using daily.co which is new to me. It seemed to work fine but Chrome only. A nice break from the misery of both Hangouts and Skype.

The whole group is around 30 start-ups, broken into three subgroups for office hours. Our first session was 1 hour which was spent by each team taking 5 minutes to introduce themselves. For normal people this should be an easy home run but not for me. Trying to create a new type of thing that no-one currently uses or has asked for means this is a nightmare. I need about three hours and a whiteboard!

So as I wait my turn, I'm really feeling the lack of sleep over the past couple of days, my heart is thumping and for some reason I start shivering. I finally get to say my bit. Everyone looks confused. More work to do but, its gone worse in the past, so maybe some progress!

This means that a massive online course can offer 5 minutes focus on each startup a week. Like most things in life, you get out what you put in. I think the ultimate value will come down to the group. Will the teams all pitch in and support each other or will it be ships in the night and only exchange words for 5 minutes once a week? Time will tell. Either way, I'll squeeze us much as I can out of my 5 minutes.